Walton Ford at the Brooklyn Museum 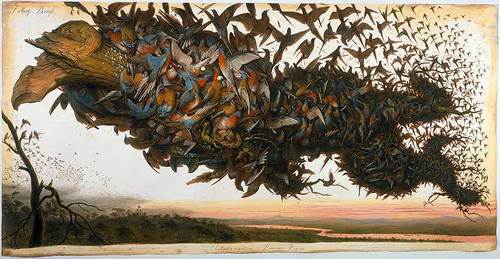 Yesterday, Jos.A. Smith and I visited the Brooklyn Museum to take in 3 extraordinary shows. I wasn't familiar with one of the artists who ended up being the one that left me awestruck. Walton Ford meticulously renders large scale fantasical looking animals in a style reminicent of early scientific depictions, and Audubon's work. Look further and they become metaphors for contemporary issues, complete with hidden imagery, scrawled notes, and an attention to detail that never gets "tight", all on carefully distressed paper. The works are beautifully rendered and powerfully moving. Highly recommended. 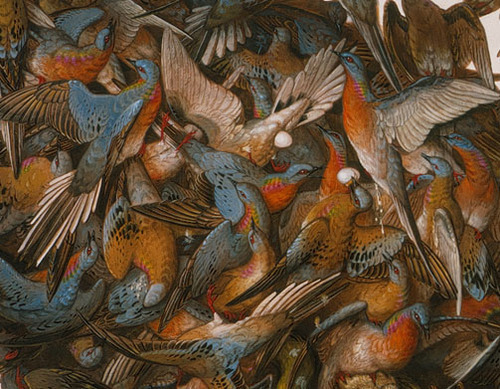 New York–born artist Walton Ford, a 1982 graduate of the Rhode Island School of Design, draws inspiration from the work of such nineteenth-century artists as the naturalist John James Audubon and the French caricaturist J.J. Grandville, whose part-human, part-animal subjects satirize man's shortcomings. This exhibition presents more than fifty of Ford's large-scale, meticulously executed watercolors from the 1990s to the present, which depict birds and animals in a style resembling Audubon's prodigious Birds of America—but with a significant twist. While beautiful, Ford's paintings often portray scenes of violence and offer a wry critique of colonialism, the naturalist tradition, and the relationship between man and animal.

Tigers of Wrath: Watercolors by Walton Ford is organized for the Brooklyn Museum by Marilyn Kushner, Curator of Prints and Drawings.