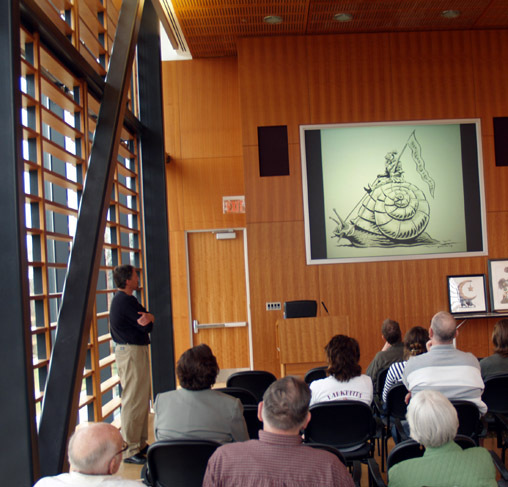 The Skillman Library at Lafayette College.
Gave a talk to academia this week (me on the left). The focus was Iraq and terrorism, using my editorial work as the vehicle. Admirably, the college is attempting to raise the consciousness on campus - Joel Meyorwitz talked last week (a tough act to follow). Started out with 150 images, editing it down to around half that. Had a very thoughtful and interested crowd in attendance and so it went very well. The principle point I was trying to make was that in the age of spin, rhetoric and propaganda, the artist as "purveyor of truth" can cut through it all like a knife. Or, conversely, become a tool of the propaganda machine. Because of the narrow and often skewed opinion expressed in editorials, I try not to illustrate the rant, but instead find a universal humanity - engaging viewers emotionally and hopefully provoking them to think beyond the rhetoric. Having just put this down as text, it looks so damn lofty and self important, but luckily, I think I struck the right chord for the talk.
Topical: Events